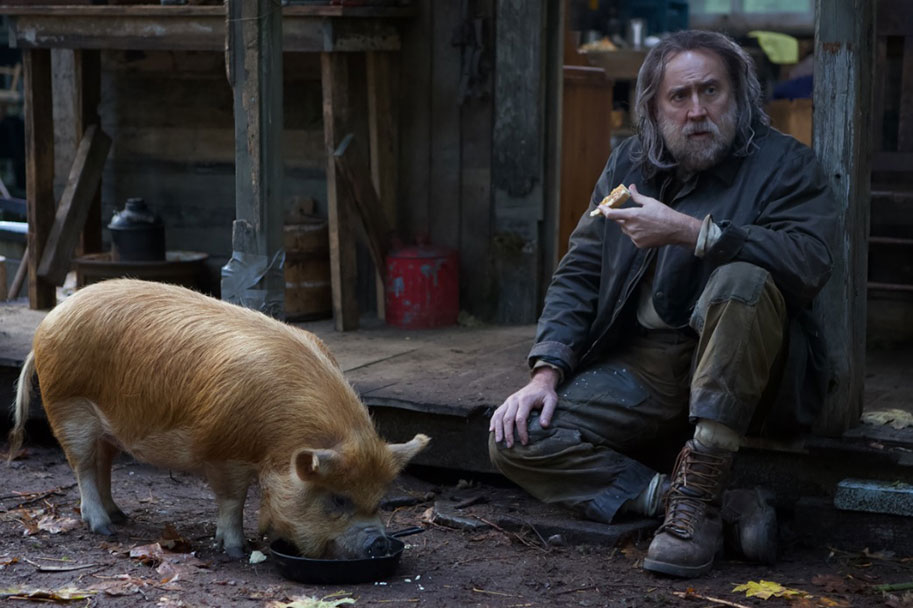 Expect the unexpected as I believe I’ve just witnessed 2021’s finest artisan gem. Pig is truly a soulful yet devastating journey showcasing the effects of grief and companionship, especially on how far Nicolas Cage is willing to go to get his beloved truffle pig back.

Divided into three chapters, the narrative follows Robin Feld (Cage), a truffle hunter who lives a quiet and simple life in the great wilderness of Oregon alone with his Pig. However one fateful night his cabin in the woods is raided and pig kidnapped. Robin must return to his forgotten past with assistance from the only contact he has, Amir played by Alex wolff who stops by once a week for his supply of truffles. Amir aids Rob in finding and rescuing the animal.

Pig is Michael Sarnoski’s feature film debut as a writer/director and has truly shown that he’s got a distinct visual style as the filmmaking is phenomenal plus the cinematography adds a dampness and disenchanted quality to this foodie noir.

Nicolas Cage has truly aged like fine wine as he’s not afraid to make himself look and feel dirty in the truffle woodland environment.His performance shows a deeper side to the actor since he plays a character quiet and introverted with only few words. Pig also marks Wolff’s best role since his breakout performance in Hereditary.

Pairing Cage and Wolff together was the films masterstroke. both work perfectly together and have the chemistry which allows them to go back and forth with each other, which is enjoyable to watch.

With her thick auburn hair, striking eyes and sleek physique, Nicolas Cage’s latest co-star is Brandy who’s landed her first ever onscreen role as Pig. Though despite looking the part brandy had to go through weeks of training, encouraged with grapes and apples she eventually leaned to sit, step back and jump, she even had her own trailer.

Without saying too much, Rob is able to gather that the culprits are from Portland and must definitely share connections with his past life there as a renowned chef and loving partner. This allows the script to peel away each layer of character such as Amir who had a toxic upbringing and seeking his fathers approval. Their search takes them down into the cooking scene of Portland as the characters are fuelled by the passion for food.

If your expecting a rampage, go find another movie. There is a little violence in the film, especially seen through an underground chefs’ fight club of sorts. Its unglamorous and brutal thus not easy to watch. Cage’s mountain man is keenly observant and verbally fights them by saying meaningful things that strike other characters in a deep place. He’s not being abusive, just telling them the gods honest truth as he see’s it. Sarnoski goes through every scene in detail, he provides exceptional visuals that left me in tears. Henry Mancini’s score accompanies the film gracefully with the addition of classic themes that aid in the films progress in building an emotional ending. The film never breaks it’s tone and stays consistent and effective. Cage seems at home smell-testing the mushrooms he’s truly a scavenger.

Overall, Pig is a phenomenal piece of art that tells an emotional, touching and lonely journey that focuses on companionship and discovering who you once were, especially facing your past. The film has also proved to be one of Cage’s best performances to date. Now we just need a film showing the pigs perspective.

Paw Patrol: The Movie | An Animated Film For Kids and Kids Only