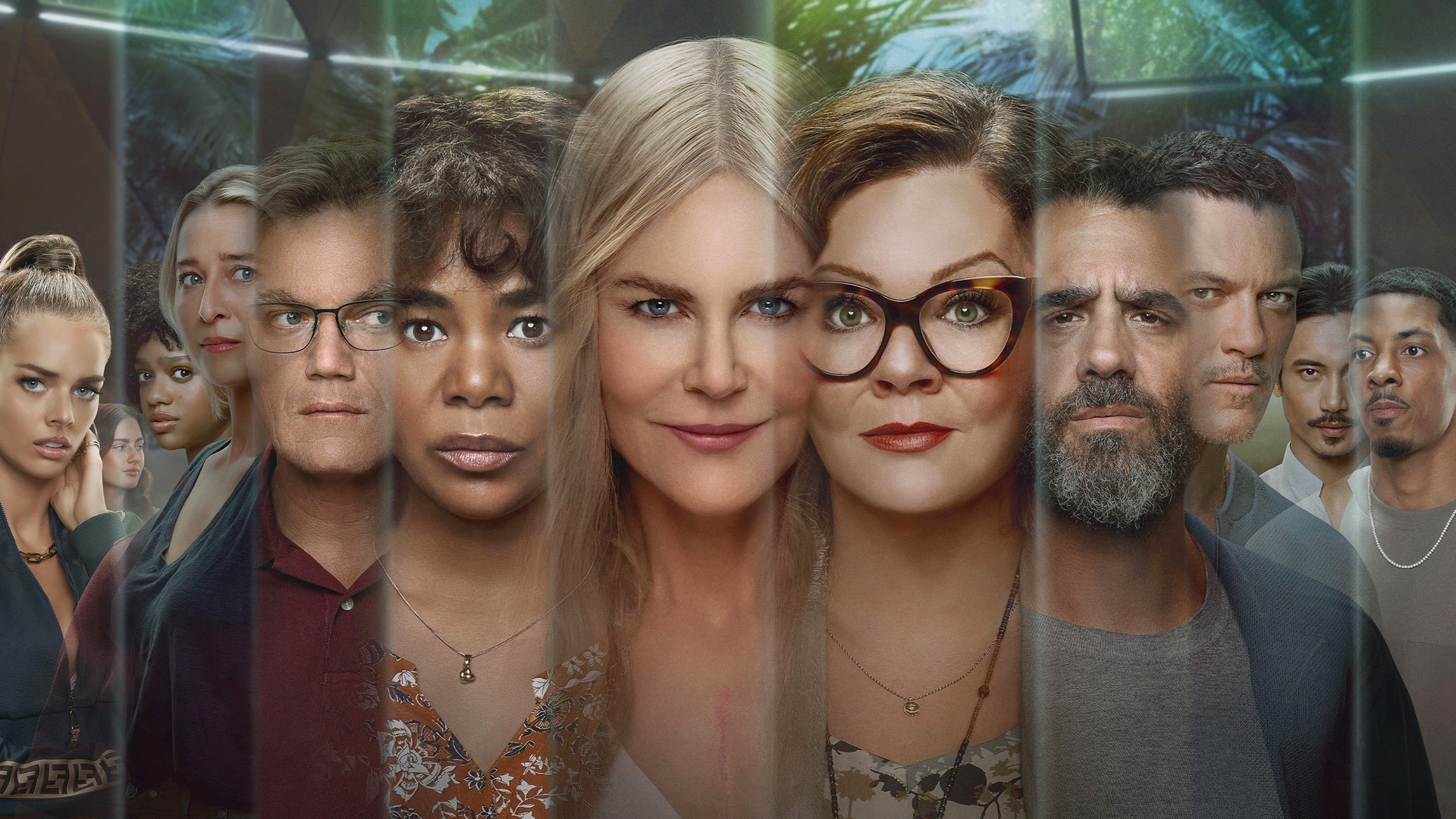 Could ten days at a wellness retreat really change you forever? These nine perfect strangers are about to find out. Welcome to Tranquillum House a place were these nine strangers have come to lose weight, reboot and some are here for reasons they can’t even admit to themselves. Amidst all the luxury amenities and architecture lies ten days of hard work that ultimately will challenge them, though they have the faintest idea what lies ahead.

There are solutions they may see, but how far are they willing to trust someone who seems to have all the answers.

Nine perfect strangers is a new eight- part series based on the book of the same name by Liane Moriarty and after the success of Big Little Lies and The Undoing, writer/producer David E. Kelley is back with Emmy-winning star Nicole Kidman to adapt this best seller. Once more they have dived into the drama full of gossip and dark humour. The central Mystery is about a mysterious wellness entrepreneur, who is receiving anonymous death threats during a retreat that is unsteady.

Hulu on Wednesday debuted the first three episodes, but for UK viewers Nine Perfect Strangers debuted today and will be every Friday on Amazon Prime Video. Jonathan Levine directs all eight episodes, the first three of which will be covered in this review.

Staying at this Lavish wellness spa are the Crew of Nine Strangers that go through this 10 day retreat to rejuvenate themselves. Among them is romance novelist Frances( Melissa McCarthy) who’s successful writing career appears to be past its sell by date. At the start of episode one titled “Random Acts of Mayhem” her agent informs her that the publisher is passing on her latest novel and would prefer to buy out her contract.

Then there’s Instagram Influencer Jessica(Samara Weaving) who’s got insecurity issues. She’s with her husband Ben(Melvin Gregg) in an attempt to save their relationship.

The Marconi family, Napoleon(Michael Shannon), his wife Heather(Asher Keddie) and their daughter Zoe(Grace Van Patten) are all attending Tranquillum House together as they mourn the loss of a loved one which they also touch up on in episode two titled “The Critical Path”. Then there’s Tony(Bobby Cannavale) a grizzled gruff loudmouth who hides his substance abuse struggle whilst also having a strained relationship with his own daughter.

Excited and perky stay at home mum Carmel(Regina Hall) is also staying at the Tranquillum. She’s sweet but extremely nosy and perhaps a tad more Volatile that you might expect. Rounding up the group is Lars(Luke Evans) the only Tranquillum guest who seems to suspect that something is not quite right.

However the biggest mystery is Masha(Nicole Kidman), she’s the mastermind behind Tranquillum House’s unique and unusual form of therapy. Masha Controls every detail from protocols, special smoothies and is even personally involved in her staffs (Tiffany Boone and Manny Jacinto) lives. Nicole Kidman truly gives the character a mask to hide in and she’s able to shut away the inner demons at work.

Kidman’s performance is eccentric, flawless and otherworldly, she even does this alarming stare straight through the camera which drew me in. As the series progresses through it’s first three episodes we see Masha’s dark secrets star spiralling out of control. Each episode shows violations, failings and betrayals.

The first three episodes move at such a glacial pace and takes time getting to know the characters and to further the plot. much of the revelations are set up mostly during the first act amid shared meals, group activities and sessions. It’s truly the stories that bring these strangers together. Happily it’s the cast that get the story going, from Luke Evans’s smug smile whilst he stirs up the pot and causes unrest, Regina Hall who gets the laughs and the tension as she plays a high strung but earnest mother. Samara Weaving shakes things up by becoming an Instagram celeb and Manny Jacinto, who I’ve loved since he played goofy Jason Mendoza on The Good Place. At first i didn’t recognise him as his goofy personality has become serene.

Happily the most thrilling performances come from the established stars, this is definitely a bonus for making Strangers watchable. Firstly Napoleon feels like a character that’s ripped from real life, Shannon’s intense performance elevates through the first three episodes, whether he’s delivering an intoxicated speech or singing in the hot spa.

Melissa McCarthy is also another standout, plus she’s also an executive producer on the show. McCarthy brings the hilarious one-liners but her performance also wrestles with trauma and growth. She’s paired brilliantly with Bobby Cannavale. They take full advantage of the hilarious and chaotic chemistry they share onscreen.

Trauma is used throughout episodes 1-3 as an experience, it can also sometime motivate us. But Nine Perfect Strangers uses Trauma to explore these broken characters and ultimately reconstruct them which is a tough Journey to take and Masha will have their mental health readings go off the charts. By the end of episode 3 titled Earth Day, Nine Perfect Strangers became an intriguing worthwhile watch especially for the drama, thrills and somewhat humour.