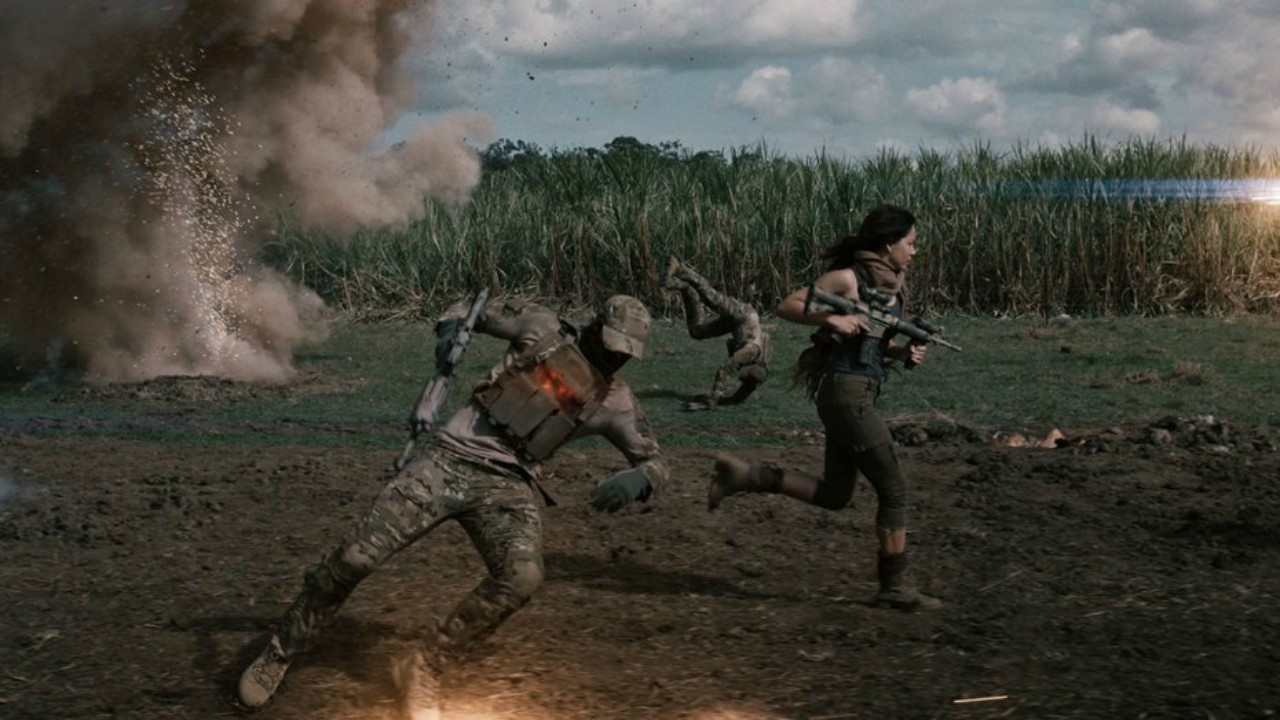 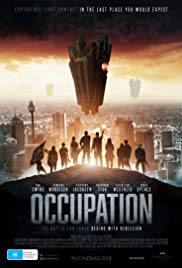 I got out of worse situations than this.
Been married three times.

This must be the stupidest movie ever made about aliens who want to use our planet as a replacement. We already saw it happening in “War of the worlds” and “Independence Day“. But those movies overwhelmed us with expensive special effects and immense battles between earthlings and non-earthlings. The most original thing about “Occupation” is that it doesn’t happen on American soil but on the other side of the world. Down-under in Australia in particular. What they did learn from the American versions, is the patriotic waving with a flag. So expect a half-burned Australian flag somewhere near the end.

Right now, there’s a 15-year-old Swedish girl who comes to the European Union to fight for better environmental measures before we all ruin our planet. Apparently, these alien invaders haven’t listened carefully to their local “Rise for climate” movement and thereby seriously fucked up their planet. The moment the Alien chief announced this, I laughed spontaneously. I don’t know if there were any environmental protests in the world when they released this movie, but I thought it was appropriate. But that was the only humorous thing I had to laugh about spontaneously and sincerely. The rest of the film makes you want to cry actually. Except for the first 15 to 20 minutes. I still had hope then. Admittedly, the special effects weren’t impressive, but it looked promising. Those 20 minutes were fully utilized to present the entire group of people that formed the basis of the revolution.

It’s really true. A mobile home can stay ahead of lightning-fast alien aircraft.

First, there’s Matt Simmons (Dan Ewing) and his wife Amelia (Stephany Jacobsen). He’s a recovering “Australian Football” player who re-enters the field after taking a dose of pills against his headache. Furthermore, we meet Peter (Temuera “Once were Warriors” Morrison) and his beautiful daughter Bella (Izzy Stevens) who happened to have chosen this small Australian village as a short-term stop during their trip with a mobile home.

And then Jackson (Charles Terrier), a teammate of Matt who has taken over his role as the team leader and explicitly shows that, and his girlfriend Vanessa (Rhiannon Fish) is introduced. The moment the power goes out and an apocalyptic, stroboscopic light lightens the sky, it’s the beginning of a murderous alien invasion. And this jumble of persons ends up in Peter’s mobile home (along with local commentator Seth Grimes played by Felix Williamson). And yes, they know how to get away from this superior breed and end up hiding in a derelict farm.

The CGI was at times excellent.

The story “Occupation” has been told countless times. Nothing new under the sun. Naturally, those randomly gathered individuals become the basis for an uprising against the alien invaders. For that, the very first mutual feuds and misunderstandings must be cleared up, in order to conclude that cooperation and togetherness are a fearsome weapon. Even against creatures that have evolved much further technologically.

What really impressed me was how amazing it sometimes looked. Certainly when you realize that the budget was considerably smaller than that of an American blockbusters. The CGI used for the Martians’ mothership was certainly not bad. The advancing ground troops certainly had an old-fashioned look and reminded me a bit of Scifi from the 70s. And yes, when they removed the helmets of the aliens, their appearance was kind of cliché with those eyes of a fly. The most realistic thing in this movie was the time period. The shown conflict lasts more than a few days. A few months are being bridged. But the story is so full of unrealistic and ridiculous things that you’ll forget about that real soon.

Let’s sum up some stupidities.

A small anthology. Extraterrestrials conquer the planet with their giant spaceships and an army of laser-equipped stormtroopers. What do you do if they infiltrate into your hideout? Indeed, you just crawl behind a mattress or door. Guaranteed safe.

And when you conclude that natural surroundings act as a kind of camouflage, why don’t you use that to protect yourself all the time? Apparently, they realized this at a certain point in time. When they approached a legion of aliens, they were able to avoid a confrontation by driving into a cornfield. The upcoming troops immediately lost track of our heroes (Stupid aliens, they just turned left) and stayed behind just looking around in a dazed way.

Do you remember the troops the Americans gathered to start their attack against the mother ship? Here they save the world by deploying an ultimate attack with roughly 12 people. Even in a Smart, prepared for the upcoming war. And when someone just escaped death and was lying in bed comatose for a long time, you can get him up and running immediately by throwing a bucket of ice-cold water over him. And the final boss fight is just too grotesque for words.

Hey, you blew up half the planet, let’s shake hands.

But especially the end is totally whacked. Finally, they succeed in overriding the cruel conquerors and then suddenly they get all evangelical. Remember that phrase about turning the other cheek? In short, half the population was disintegrated or became slaves, and then they are going to shake hands and talk about improving the world by working together as a united force? Any spiritual or religious movement could use this as a study material.

It’s strange they are suddenly so kindhearted when you compare this with the scene where Temuera Morrison takes care of a captured alien. That was pure rage. But there are more of these oddities to discover in this courageous attempt by the Australians to prove that they are also capable of producing Scifi. In any case, I hope that if we ever have to deal with an alien invasion, these Martians will also be as tame and stupid as those you see in this movie.

FILM RATING
Related Topics:ActionREVIEWSsci-fi
Up Next