When it comes to different forms of entertainment the worlds of film and professional wrestling are closer than one may think. When done well pro wrestling can be an exhilarating mix of athleticism, storytelling and audience work. Considering how compatible these skills are to success in film it’s only natural for wrestlers to try their hand at acting. And while it seems like the skills seem perfect for acting they don’t always transfer over. For every Dwayne “The Rock” Johnson or John Cena finding success in Tinsel Town, wrestling hall of famers such as Kurt Angle, Stone Cold Steve Austin and Hulk Hogan have typically flopped when they tried to headlock Hollywood. And somewhere in the middle is Dave Bautista.

Trained by Afa Anoa’i, Bautista was signed by WWE in 2000 and made his debut in 2002 as Batista. Starting at the bottom of the ladder he became one of the top guys in the game winning multiple world championships and working with some of the best of all time. Popular whether he was a face or a heel he became one of the biggest stars in WWE history thanks to his unique look and seemingly endless amount of charisma. Since leaving in 2010 he has moved onto film appearing in movies such as Spectre, Blade Runner 2049 and, his big break, the Guardians of the Galaxy franchise. But as big as these movies have been he hasn’t been given a lead role since 2011’s House of the Rising Sun. For the most part he has been cast as, and excelled at being, the hulking giant. But like his wrestling career he has made a name for himself, worked his way up the ladder and finally gets another shot as a lead in the Die Hard-esque Final Score.

Taking time off to go overseas, U.S. veteran Michael Knox (Bautista) visits the family of a friend who was killed in the line of duty. Spending the evening with his friend’s daughter Danni (Lara Peake) the two go to a West Ham United match. As the game begins, international terrorist Arkady (Ray Stevenson) secretly takes control of Upton Park with his army of heavily armed terrorists. When Danni goes missing Michael needs all of his military training to not only save her but prevent a massive disaster. 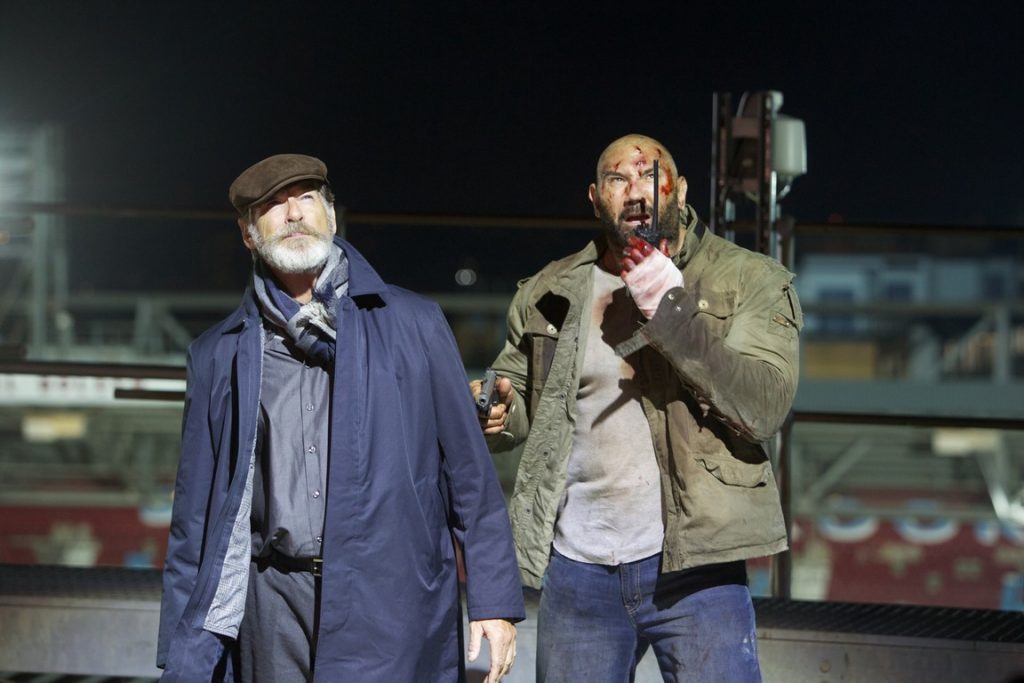 I have to admit that I was a bit skeptical hearing Bautista would be the lead. Not that I think he can’t be the star of a movie but I didn’t think he could work as a John McClane-style action hero. It requires an everyman relatability that you don’t typically find in a guy that’s 6’6″ and nearly 300 lbs. of pure muscle. So, imagine my surprise when he not only pulls it off but turns out to be pretty good at it. Even though his ability as an action star is the focus he shows off a surprising amount of heart as Knox. Sharing a great on-screen chemistry with Lara Peake the two feels real. Whether it’s the playful teasing Bautista gives when he catches her sneaking out or the urgency on his face when Danni goes missing Bautista is able to make it all feel legitimate.

That isn’t to say that Final Score is too heavy on the dramatics. Because while Pierce Brosnan and Ray Stevenson put in the kind of dependable performance audiences have come to expect the real highlight in the supporting cast is Amit Shah as Faisal. A steward at the stadium he is pitch perfect as the movie’s comic relief. Nailing each of his lines he steals almost every scene he is in. Of course, this isn’t a comedy. More than anything else Final Score is a showcase for Bautista to kick butt. And for the most part it delivers. 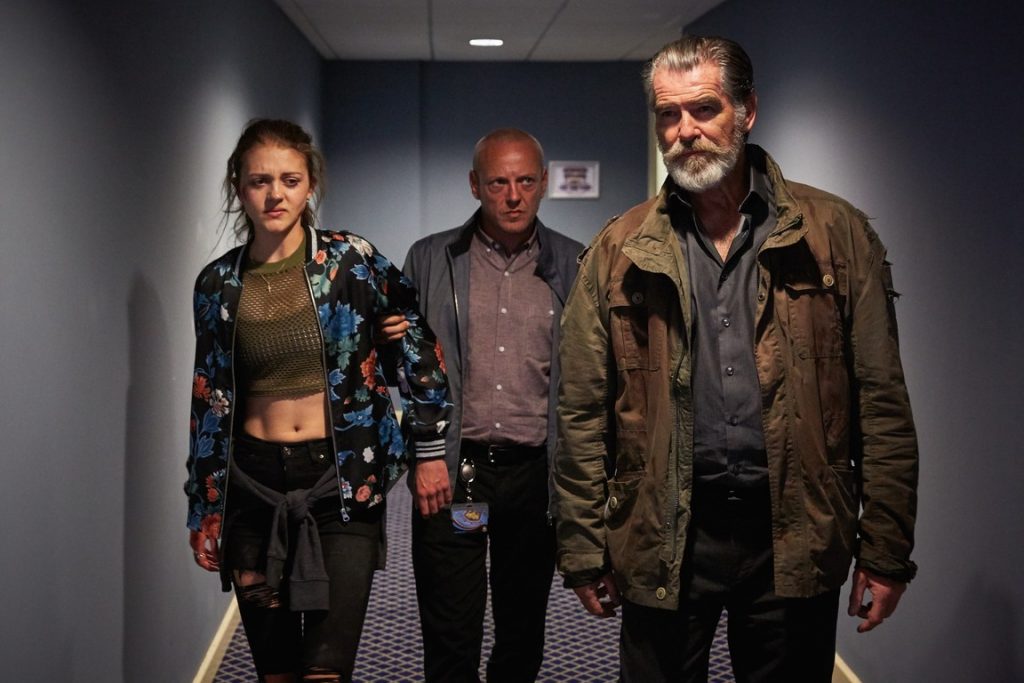 Directed by Scott Mann (The Tournament) Final Score is a throwback to 90’s style action, Die Hard and Sudden Death in particular. And like those past movies Final Score‘s focus is on the fireworks which it mostly delivers on. We get a little bit of everything from gunplay to hand-to-hand and even a motorbike chase inside of the stadium. The problem arises when it comes to the editing.

Like a lot of action movies Final Score suffers from shaky cam syndrome. While it adds grit to the bike chase and shoot outs it becomes hard to follow when it comes to any hand-to-hand fight scenes. A shame because from what I could tell the fights were well choreographed. Each hit feeling big when you can actually see it. Complimenting the fights were some killer practical effects. We may not have seen the fight but we certainly got to see the aftermath. Certainly, good enough to make up for some lackluster CG effects and an overly cliché plot.

But in all honesty, do these faults really matter? Final Score has no aspirations to revolutionize the world of film or become the next big thing in action cinema. Instead what it aims for is an old school, 90’s action movie such as Sudden Death. And in that respect, it’s near perfect. With a likable cast and some fun action scenes it makes for a brisk, enjoyable watch. Pure popcorn fluff Final Score is perfect for a night in. As for Big Dave, quick with a quip and believable as a badass he pulls off the tough guy with a heart of gold beautifully. Like his time in wrestling it may have taken a bit but he’s finally ready for the main event.

We Now Have Our First Look At Joaquin Phoenix In ‘Joker’