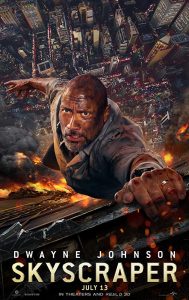 At the risk of sounding like an old curmudgeon, movies just aren’t the same anymore. As franchises and cinematic universes became the norm we have seen far less star-driven movies. Instead of heading to the theaters to see the latest Stallone movie or who Jason Statham will beat up this time it’s more about the latest chapter in the Marvel Cinematic Universe or how a YA book series is going to be the start of a new franchise. One of the few names to buck this trend has been Dwayne “The Rock” Johnson. The former wrestling world champion has become one of the biggest stars in Hollywood. And while he’s better knowing for rebooting franchises like GI Joe or The Fast & The Furious he is also the center of a very specific genre, ‘Rock Movies.’

Johnson stars as Will Sawyer, a former FBI hostage negotiator turned security expert. Thanks to a friend he gets a job as a security consultant for The Pearl, an architectural marvel in Hong Kong. Suddenly The Pearl goes up in flames with the blame falling on an innocent Will. Wanted by the police it’s up to Will to clear his name, find the criminals responsible and save his family before The Pearl is engulfed with flame. Or, in ‘Rock Movies’ parlance, The Rock does a Die Hard.

While the script doesn’t call for Johnson to drop as many one-liners as John McClane he remains just as charming. As in  his other action movies, he does a great job selling the intensity of the situation. No matter what preposterous thing is coming after him, Johnson makes it believable. His captivating personality translates just as well in the quieter moments. When on screen with children Georgia and Henry (child actors McKenna Roberts and Noah Cottrell, respectively) all of that intensity goes away. What we get instead is the happy, smiling Rock that we’ve all come to know and love.

Joining Johnson for the second time is writer-director Rawson Marshall Thurber. First working with together on 2016’s Central Intelligence. More known for comedies such as We’re The Millers and Dodgeball this is actually his first full blown action movie. All things considered he acclimates himself to the genre pretty well. Coming in at a reasonable 102 minutes Skyscraper is quite the well-paced movie. As silly as a scene might get I never felt like the movie was spinning its wheels. In fact, it runs head first into the ridiculousness.

The Rock doesn’t just run to save his daughter. He does it in a burning park. He doesn’t just have to shut off a server. He has to do it while scaling the outside of a burning building. It’s the kind of explosive, over-the-top mayhem summer blockbusters were made for and Rawson Marshall Thurber captures every heart pounding second of it. Just as impressive is the originality for these set pieces. The finale in particular is a fun twist on the old house of mirrors setting. The only real stumble comes from hand-to-hand combat. Like a lot of directors Thurber utilizes a lot of shaky cam making some scenes hard to follow. Thankfully Skyscraper is more about big stunts than straight up fights.

As fun as Rock Movies can be they aren’t perfect and the same can be said of Skyscraper. Like a lot of his movies Dwayne Johnson is the focus the supporting cast suffer. More a collection of character traits and clichés they are basically there to support Johnson. This is particularly noticeable with Neve Campbell. It isn’t necessarily her performance either. She’s perfectly fine as Rock’s wife. The problem is how little she is given to do. More often than not she is either playing the doting wife or caring mother. It really feels like a waste.

The special effects can also be shoddy at times. Considering how VFX-heavy the action scenes can be this quickly becomes a distraction. Things like fire and the building can look quite fake. Things like green screen can become obvious if that is the kind of thing you notice. And as creative as the finale can be the effects aren’t quite as ambitious. This could be excusable for a smaller film but for a movie with a $125 million budget it shouldn’t look as bad as it is.

At the end of his 2000 book The Rock Says… the former pro wrestler tries to predict his future. With the main goal being Hollywood and becoming the next Arnold Schwarzenegger. As fictitious as the book can get this was clearly something he planned to do. In the 18 years since the book was released Dwayne “The Rock” Johnson has become a larger than life figure and Skyscraper is a perfect example why. Because despite its flaws, and there are many, it’s still a fun watch. Whether it’s The Rock jumping into a flaming building or hiding in a maze of mirrors he remains one of the most magnetic men on the big screen. With the audience in the palm of his hands, Skyscraper is the kind of summer movie Rampage wanted to be.

Skyscraper is now in theaters now

Joaquin Phoenix: “It is its own world in some ways, and maybe, mostly, it scares the f*cking sh*t out of me or something”