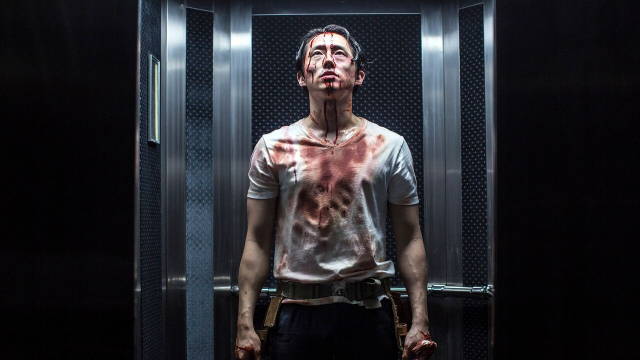 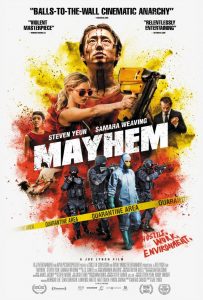 Derek Cho (Steven Yeun) is having a really bad day. After being unjustly fired from his job, he discovers that the law firm’s building is under quarantine for a mysterious and dangerous virus. Chaos erupts throughout the office as the victims of the disease begin acting out their wildest impulses. Joining forces with a former client (Samara Weaving) who has a grudge of her own, Derek savagely fights tooth and nail to get to the executives on the top floor and settle the score once and for all.

One of the things that makes film such a special medium is how they can make the mundane seem magical. Something as simple as a child’s toy collection can be not only have an adventure but can bring grown men to tears in the process. Movies can take something as nerve wracking as dating and turn it into an easy-going experience with the right musical cue and romantic moment. Seemingly he one place movies can’t make look good is the workplace.

Despite a film’s ability to enchant very rarely is your typical office job portray as a good thing. Aside from occasionally being fantastical things never actually seem enjoyable. At best the job will be depicted as a mind-numbing slog like in Office Space and at worst will be an evil corporation like Total Recall‘s Rekall. But no matter how annoying the job may be one thing is for certain, it always comes back to the workplace. And this is no truer than in Joe Lynch‘s latest, Mayhem. 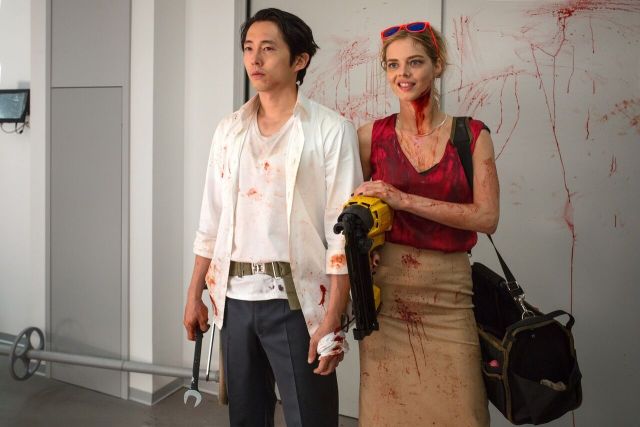 If you think this sounds a lot like January’s The Belko Experiment I don’t blame you. With both movies being about blood-soaked carnage taking over an office building it’s easy to mistake the two. In fact, I’m sure I saw the “Battle Royale meets The Office” used as pull quotes for both films. While a good descriptor it is much more fitting when applied to Mayhem. Unlike it’s bigger budgeted counterpart Mayhem doesn’t feel like a typical horror-action movie. Instead of being a more straight forward horror take Belko had Mayhem is more of a cynical look at comes to corporate life. It has a lot more personality to it and I attribute due to the influence of director Joe Lynch.

Similar to his past work in Wrong Turn II and Knights of Badassdom, Lynch does a phenomenal job mixing genres. He never lets the plot get too heavy while also never letting it become an outright comedy either. It rides the fine line between horror and humor that few directors can nail. With a more lighthearted tone and likable characters it doesn’t feel like the more sterile film The Belko Experiment became. 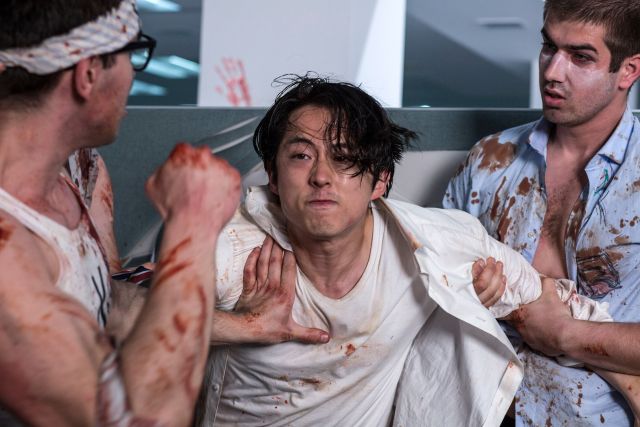 Aside from the writing a big part of this is the casting of Steven Yeun. His first lead role since leaving The Walking Dead he more than delivers as Derek Cho. Like his time as Glenn, Yeun brings with him an innocence to the role that makes him the perfect protagonist. No matter what craziness happens while he is infected you never think of him as a bad guy just someone stuck in a bad situation. Just as good in the film is his co-star Samara Weaving as Melanie. Introduced as the kind of victim of corporate America you’d expect to see in a drama she quickly sheds this image to reveal an absolutely kick ass heroine. With a sympathetic, if familiar, backstory and the right cache of weapons Melanie is the kind of wish you’d bad ass you want to be in a horror movie. Unfortunately, the same can’t be said of the rest of the cast. That isn’t to say that the supporting cast is bad because they aren’t. Character actors Steven Brand, Caroline Chikezie and Dallas Roberts put in some deliciously evil performances. The problem is how one note they feel. There is really no motive or reason, they’re just evil. Not that I think every character needs to a tragic backstory in a movie like Mayhem. I just wish there was a bit more than generic corporate villainy turned up to 11. Of course, you don’t go into a film titled Mayhem looking for a fun script or likable heroes. Those are just a bonus. No, what audiences are looking for is cinematic chaos and thankfully Mayhem delivers.

Like Lynch’s last film Everly, Mayhem moves at a frenetic pace that doesn’t lets up. Never holding back on the blood or the violence it ratchets it up with each scene. Each scene taking things up a notch before it’s explosive finale. Like the best horror-action movies Mayhem doesn’t delves too far into either genre, instead giving both their due on screen. If there is a stumbling block it would be the film’s budget. While the ambition and ideas are there the budget and story limit the settings. Aside from a few unconventional weapons and set pieces the scenes can look the same after a while. Everly has proven that Joe Lynch can get quite creative with his action scenes if given the proper resources. Regardless despite this downside you’ll never leave a scene unsatisfied. 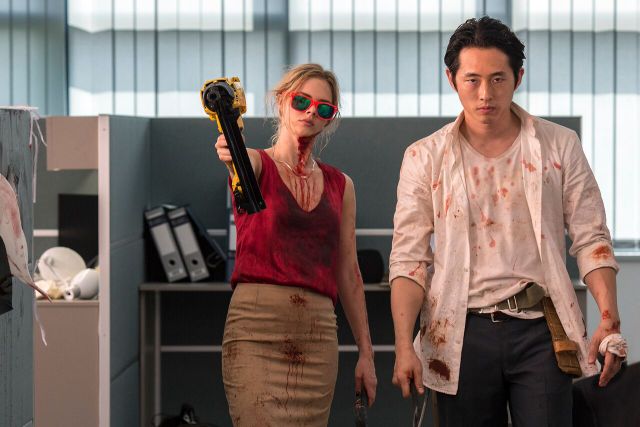 2017 has been a big year for horror movies both critically and commercially. Whether it’s mainstream fare like IT or to sleep hits such as It Comes At Night they all have one things in common, a passion for the genre. Directors such as Jordan Peele and Andrés Muschietti’s passion for the genre shows on the screen and Mayhem is no different. With Joe Lynch behind the cameras audiences are treated to a bloody and subversive take on corporate America. While it certainly has its issues, and isn’t the most original film it more than delivers on its namesake. Fun if flawed Mayhem has the perfect mix of action and scares to bring 2017 to a close.

The Zombie Apocalypse in ‘Day of the Dead: Bloodline’