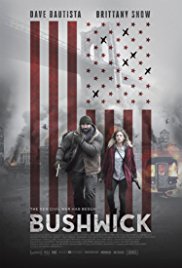 When a Texas military force invades their Brooklyn neighborhood, 20-year-old Lucy and war veteran Stupe must depend on each other to survive.

My opinion on “Bushwick”

“I mean it’s more tactical.
This isn’t an attack.
This is an invasion.”

There’s one thing this film surprised me with. And that’s the speed at which the violence begins. One moment Lucy (Brittany Snow) walks with her boyfriend through a subway station. The next moment, he’s lying dead next to her and in the background you can hear the sound of automatic guns and screaming people in panic. Turns out a war started in this part of New York. A kind of American Civil War in guerrilla style. The sound effects and the way in which the camera follows fleeing Lucy looks a lot like a third person shooter. Even Lucy’s sister Belinda (Angelic Zambrana) thought the neighbors were playing “Call of Duty” all the time.

Where’s Snake Plissken when you need him?

It’s only when Lucy is rescued by Stupe (Dave Bautista), a concierge with a military background, this realistic looking film turns into a survival journey through a suburban district of New York. Immediately I had to think of movies like “No Escape“. But also of older hit-movies such as “Escape from New York” and the magnificent film “Warriors“. A turbulent flight through neighborhoods where street gangs suddenly take up arms against the forces who try to take over Bushwick and punks who take adventage of the lawlessness to rob neighborhood stores. And all this looks as if it’s filmed in one take.

The reason why those troops are penetrating this neighborhood and total anarchy breaks out, sounds quite ridiculous and unlikely the first instance. But thinking further about it afterwards, you could say it isn’t. Such a situation could occur somewhere in the world, given the interracial and domestic conflicts that arise everywhere. But apart from this original approach, this film has little to offer. The rest of it is just about the two main characters trying to escape the violance in a city that looks like a battlefield. Even the noisy and rebellious looking local residents who are waving with their illegal weapons excitedly, don’t make it more interesting. Although some of them were in a high stage of enthousiasm.

In addition to the fact that it’s all simplistic and there aren’t really surprising developments, there were also some things that were quite annoying. For example, the continuous mumbling of Dave Bautista almost the entire movie. Besides the emotional closing argument, his oral contribution was limited. He resembled Rambo who also mumbled the whole movie in those days. And although he seems to have a lot of military experience, he continously refused to use more sophisticated firearms. I’ve lost count of the number of times I got pissed because they ignored modern automatic guns, which were lying around for the taking. They stubbornly held on to their small handguns. I would have known better.

No survival skills needed to watch this movie completely.

I’m not sure if it was the intention to make a political statement. If so, they didn’t quite succeed in doing that. Before you know it they shifted back to making a superficial action film with Jews jumping around with Uzi’s. In general, the acting isn’t so bad. Brittany Snow is doing her best as an emerging survival expert. Dave Bautista’s posture is very suitable for playing the character Stupe. His physique and rough-hewn behavior makes an extremely dangerous neanderthal of him (mumbling included). And if you’re looking for a movie with a denouement so noncompliant compared to the rest, don’t look any further. Believe me. So, “Bushwick” isn’t special, but you don’t need survival skills to watch it entirely.

FILM RATING
Related Topics:ActionREVIEWS
Up Next